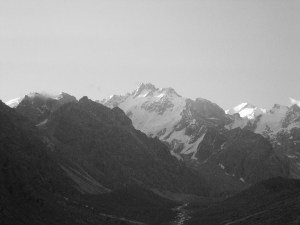 As you might have noticed, my mantra for the past couple of days has been ‘expect nothing’. Well, it doesn’t work for me. I usually expect less than nothing, and this attitude has spared me many a disappointment. I think I will be going back to it after the past two days.

The training finally started. My group seemed nice if apprehensive of me, as usual. We are eight people, everyone from different parts of Russia. I was surprised to hear that one of our group members, Andrew, was form the US; he works in Nalchik. The instructor is a lady from Ukraine. I was named ‘zavhoz’ and placed in charge of caring for the group’s nutrition during longer climbs of 2-3 days. Although I’m a vegan no more, I’m still a vegetarian, so the meat-eating boys have certainly made a mistake when they voted for me to be ‘zavhoz’ :).

After we’d dealt with the organizational side of the course, practice began. We started by reviewing knots and belaying techniques, which I’d forgotten all about. I was never great with ropes, but instead of practicing a forgotten skill, it felt like I was struggling to learn a new one – embarrassing and not a good start. It didn’t help that the instructor and I weren’t getting along too well because I have a tendency to block all information coming from a source I don’t trust.

I was surprisingly tired and disappointed in myself after those first couple of hours. We took a break to have lunch, and then headed up the moraine for an acclimatization hike. It was an exhausting walk uphill and, yet again, my body wasn’t living up to either my own or the group’s standards. Towards the end of the hike we practiced mountain rescue and shared a few laughs. However, on the way back to the camp everyone already knew who the weakest link was going to be for the duration of the course – me. 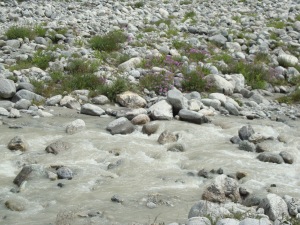 Day two started with a long hike towards a steep grassy slope with some boulders and scree where we would practice walking on these types of terrain as well as ice-axe use. In my ‘astronaut’ mountaineering boots – La Sportiva Spantik, which are normally used to climb at around 7000 metres – I was clumsy and sloppy with my technique. I wore the Spantik to get used to them as I will be wearing similar boots during the upcoming expedition: they have very thick soles and because of this one cannot ‘feel’ the ground under one’s feet very well. I couldn’t tell you how many times I slipped and fell; angry with the whole world, no less, for my own weakness and many, too many, technical shortcomings.

The training took us about four hours, after which we came back to the camp for a lunch break. The group then decided to take a walk to one of the nearby waterfalls. Although I initially followed, I had to stop halfway up – I was emotionally and physically spent. The ‘magical’ transformation from the strongest and fastest in any group to the slowest and least able in a group of beginners is not easy to deal with. What makes things worse is that I’m completely unable to connect with any of the members of my group, and it is not just my physical weakness, I’m afraid, which pushes people away – it’s my solitariness. One of the key lessons my parents wanted to teach me when I was still a young girl was independence, and in the course of my youth and early adulthood I might have learnt it all too well. Now I am not a team player at all: I trust myself to be my own leader, but not to take anyone else for the inevitably bumpy ride.

These past two days have exposed too much of me to me, and I saw little that I liked. Thus, when I repeat my mantra, ‘expect less than nothing’, I will remember that it’s mostly me that it applies to. We have eight days to go still before the course is over and I am not sure I can make it as I’ll have to face my worst enemy to do so – myself. And if I defeat her, what will I be left with?